A one-hour biographical documentary, Julia Robinson and Hilbert's Tenth Problem tells the story of an important American mathematician against a background of mathematical ideas.

Her work, and the exciting story of the path that led to the solution of Hilbert's tenth problem in 1970, produced an unusual friendship between Russian and American colleagues at the height of the cold war. In this film, Robinson's major contribution to the solution of H10 triggers a tour of 20th century mathematics that moves from Paris in 1900, through the United States, to the Soviet Union and back.

Following the passionate pursuit of an unsolved problem by several individuals in different countries adds to the emotional intensity of the mathematical quest.

This film covers important events in the history of modern mathematics while conveying the motivations of mathematicians, and exploring the relationship between mathematical research and the development of computers. The key protagonists and advisors to the project are recognized as the most prominent in their fields.

Julia Robinson's story, and the presence of prominent women in mathematics in the film, should inspire young women to pursue educational opportunities and careers in mathematics. 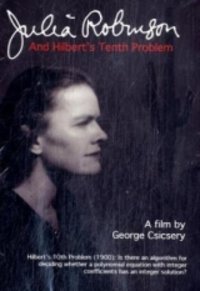